Founded in 1981, Cinq Deux Un Model Agency is one of Tokyo’s most successful and reputable international modeling agencies. Cinq Deux Un has introduced many fashion models from the USA, Canada, South America, Europe and other parts of the world, including Ty Pennington of the popular ABC series “Extreme Makeover: Home Edition.”

Ito Compton worked as Cinq Deux Un’s Head Booker in Tokyo for 8 years before moving to Southern California, where she now works as Scouting Director. She travels all over world, meeting young people and helping them reach their goals.

On this episode of Model Talk Radio, Ito explained exactly what it’s like to work in Japan, including guaranteed salaries, accommodation, language barriers, the type of work available and what clients and agencies look for in a model. 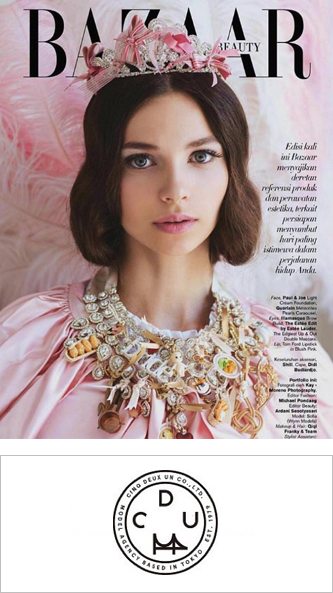 What are the statistics required to work in the Japanese market?

In the fashion world, there are many different types of requirements needed depending on the country the model wants to work in. The Japanese market can take shorter, smaller models than the US or European markets. If they have a nice proportion, girls can be 5’6 to 5’7 and guys can be 5’10 ½ to 5’11.

Cinq Deux Un needs many different types of looks, so they’re not looking for anything specific. They want more of a total image, with beautiful skin and a charming smile.

Once an agency sees someone with promise, what’s the next step?

Models have to build a little bit of professional experience before they go to Tokyo. It doesn’t have to be in big markets—it can be out of nowhere—and they don’t even need to be with an agency. It’s helpful to have training in angles, posing and expressions and it’s even better to have fashion test shots, but if they don’t, Ito can help them out with model basics and recommend photographers with reasonable prices.

Are there guarantees offered?

When Cinq Deux Un takes models from outside of Japan, they try to make their trip worthwhile by offering modeling contracts that guarantee all of their expenses. Many Asian markets do this to bring good Western models into their market, because there is so much need for North American and European models in Japanese fashion and commercial markets.

The Japanese market covers all expenses for going to and living in Japan (in contract), including tickets, composites and accommodation. They front the money assuming models will earn enough to cover their guarantee, but if models don’t make enough money they do not have to pay back the agency.

For new models without much experience, Cinq Deux Un calls it the “Covering Expenses Guarantee.” When they become working models with good tear sheets and experience in big markets like Paris and Milan, Cinq Deux Un can also guarantee how much they’ll make for two months, which can be anywhere from $20,000 to $30,000, and more. Top models can receive guarantees of $150,000 plus.

How are models paid?

In the United States, commercial models are paid either by the hour or a daily rate. Japan is similar, but they don’t have career rate systems for individual models.

Each time, clients tell Cinq Deux Un their budget, then Cinq Deux Un tells them how much the guarantee is supposed to be. Bookers have to negotiate with clients, but in general they have set prices for 2 or 4 hours of editorial, catalog, commercial or lingerie.

As for commission, international modeling agencies take a higher fee because they have to do more for their models, like getting working visas, driving models around, translating and offering nice, clean apartments. Cinq Deux Un’s fee is 40%, and they pay in Yen on the last day of a model’s contract. Although clients can take up to 3 months to pay the agency, Cinq Deux Un always pays each model before they leave.

It the person is mature enough, 14 or 15 years old is fine. Although agencies only cover the model’s travel expenses, parents often travel with their child to make sure everything is safe and okay. Some parents stay for the whole contract, while others only stay for a few weeks.

What’s the best time of year to go to work in Japan?

Summertime is the best time to go to Japan because the terms are longer (at least 2 months), but the season is very competitive because so many high school students come over during that time. Homeschooling is a huge advantage because models can work whenever they like.

What would a typical day look like in Japan?

Before they go home for the night, models are given the next day’s schedule. Each day is different—sometimes they might go to three model castings, sometimes ten, and sometimes they might work from 10 AM to 10 PM. Studio shoots usually take 4 to 8 hours, but if a shoot is at a location outside of Tokyo it might take all day or even overnight.

What happens when a contract ends?

When a model has worked in Tokyo for two months, their book is full of professional tearsheets and they can work anywhere once their contract is up. They’re officially a “professional model,” so it’s much easier to get working visas in other countries. Models often go to New York, Milan or Paris, but many choose to come back to Tokyo 2 or 3 times a year. Some even travel back and forth for 10 or 15 years!

Do models have free time to travel around Japan?

Castings and auditions don’t usually happen on weekends, so models have plenty of free time to go sightseeing.

Is the language barrier an issue?

Cinq Deux Un has many non-English speaking models from South America or Europe. It can be difficult for the first week or two, but industry professionals communicate well with any nationality, no matter what language they speak.

After interviewing Ito Compton, Aaron answered questions and gave listeners tips on what to do when work slows down.

What do actors and models do when they stop hearing from an agent?

Agents in the commercial and acting world don’t guarantee work, so all you can ask of your agent is that they submit you to jobs, promote you and give you information to help you get better. Essentially, agents don’t get you the job—you do!

So if work slows down and you stop hearing from your agent, there are better things to do than calling your agent and screaming over the phone. Sit down and talk with them—they want you to work because that’s how they make money!

The first thing you should do is contact your agent by phone or email to set up an appointment—never show up to their office unannounced. Then, explain how you haven’t gotten auditions or go-sees in a while, and ask if there’s anything they recommend you do to make more work happen.

You might not be landing jobs for simple reasons, like there not being enough work for your category. Or, the problem might be with your photos. Maybe they aren’t selling you well, maybe they aren’t strong commercial photos, maybe they’re outdated or maybe you don’t look like that anymore. Other times, agents might say you have a great head shot but are failing auditions. If that’s the case, you could probably benefit from enrolling in audition classes.

If you truly want to be pushed and fought for, you might need to stop freelancing and become exclusive to one agent.

Many of the modeling agencies we work with have commercial #modeling, plus size, petite, and child modeling divisions in addition to their fashion divisions! https://bit.ly/30jVNjN

Here are some important points to consider when searching and responding to Models Wanted ads. https://bit.ly/30nOrvE

We love seeing all the #supermodel looks from #coa

@adutakech is 🔥 as always in her latest campaig

Don’t wait another day to pursue your modeling c

Did you have a favorite model look from the #vanit

The look everyone is talking about: Hailey Bieber